Working on a Node.js application I noticed that deploying its image sometimes takes more time then I want it to. I started digging into the problem and here are two steps to drop Docker image size down from 948MB to 79MB!

This is the results of my attempts:

The application is a typical web application that has frontend part (React.js) and backend part (Node.js server on Express.js.) The build process consists of these steps:

The application Dockerfile before changes (located in the root of application directory):

This Dockerfile does several things:

An interesting thing there is the alpine version. This is the smallest of available images because it based on Alpine Linux project. Alpine uses musl libc instead of glibc inside, but Node.js usually uses the latter on a typical developer system. It may break some libraries you use but there were no issues with my Express.js based application. Switching to alpine:

Run docker build and in my case, the size of the image drops down to 206MB, it’s 78% less than the initial size!

The rule is: if the dependency is only needed during the build, move it to the devDependencies section.

I don’t make a bundle for server files, so I left all server dependencies in dependencies section as they were before. That means that the working process should contain following steps:

The final version of the Dockerfile I have:

Run docker build again and in my case, the size of the image drops down to 79MB and this time it’s 91% less than the initial size! 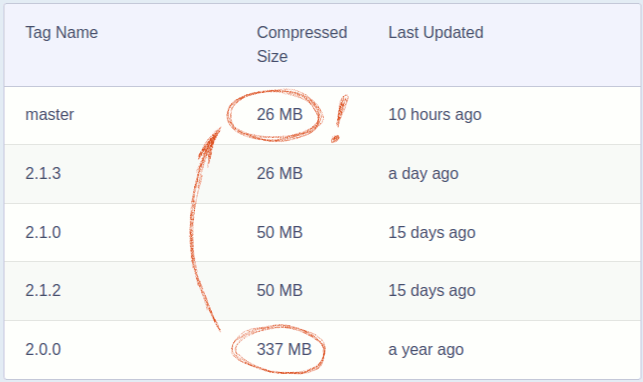 Thanks for reading. I’d be glad to get any feedback!